The solar maximum is the highest point in the Sun’s 11-year cycle. It’s the most active period, when large numbers of sunspots appear and solar irradiance increases by 0.07%. If you’d like to know when the next solar maximum is, read on. You’ll be glad you did, as you’ll learn about solar maxima, solar minimums, and the last solar maximum. 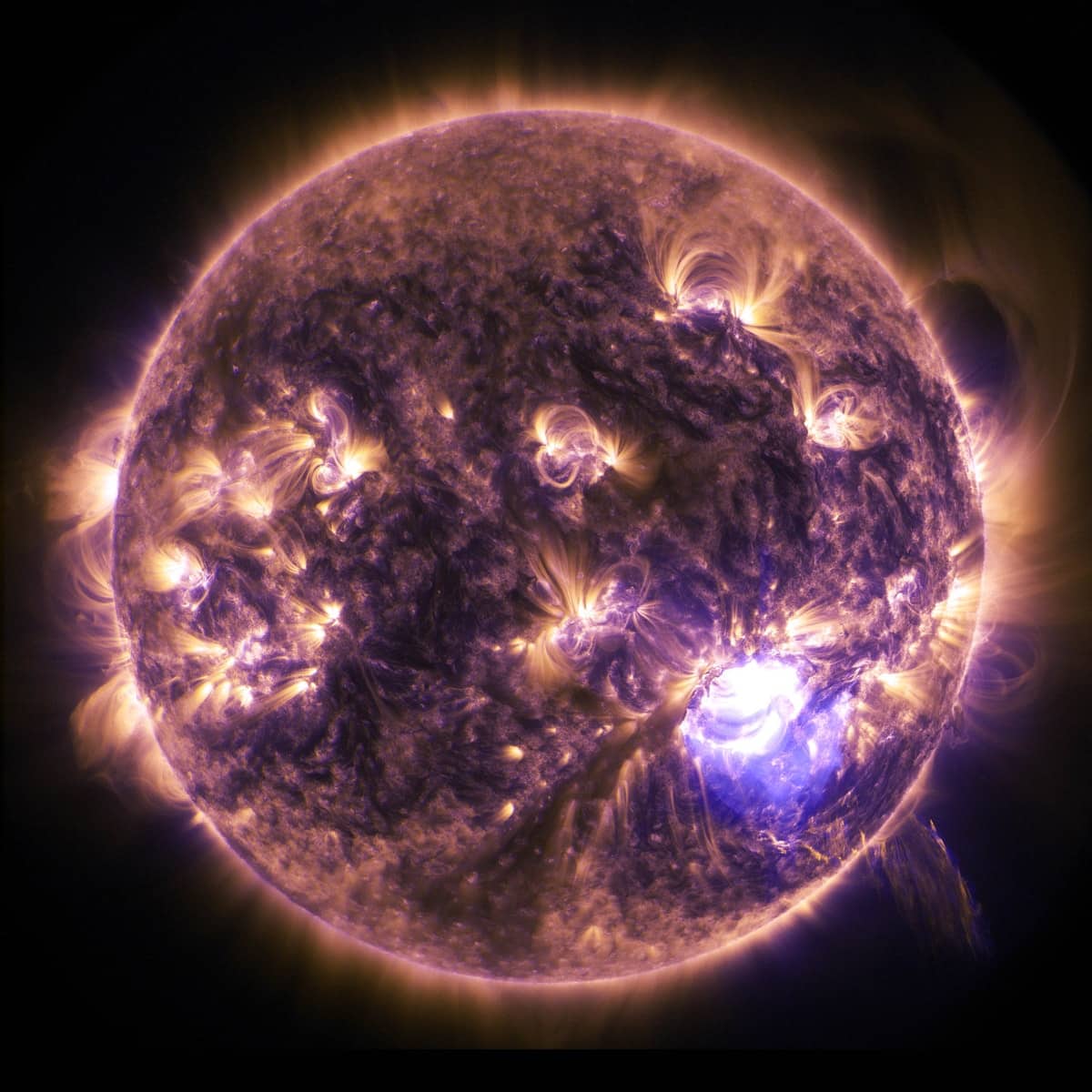 The sun’s magnetic activity varies from one cycle to the next, and the amount of solar activity is measured by the number of sunspots. In 1843, Heinrich Schwabe, an amateur astronomer, first noticed this cycle. Today, we know the solar maximum and solar minimum as the periods in which the sun is most active. It is thought that solar activity will be low in the year 2000, and it will be high in July 2025.

A solar cycle is a slow evolution in the Sun’s magnetic field. The Sun’s stormy behavior builds over time, reaching a maximum and then settling down again. Sunspots are regions of especially strong magnetic forces on the surface of the Sun, and these feature in the solar cycle’s maximum and minimum. They are cooler and appear darker than the surrounding area, but scientists have found that sunspots can also contain more energy than normal. The highest intensity of sunspots are seen during solar maximum, while the lowest activity occurs during the solar minimum.

The Grand minima of solar maximum is the lowest point in a solar cycle. It is the end of the solar cycle’s 24th and beginning of its 25th. After the solar minimum, solar activity will increase again. Despite the uncertainty of the timing and the strength of this event, scientists are predicting that the solar minimum will take place in December 2019.

While the Sun spends most of its time in a moderate activity level, it occasionally enters a grand solar minimum. Grand minima do not occur because of long-term cyclic variations, but rather by stochastic processes. They tend to cluster with an average recurrence rate of about 2000-3000 years, and show a weak 210-year periodicity within clusters. There are two types of Grand minima – shorter than 100 years and longer than 150 years. Grand minima may occur during solar cycles with a stretched length, and their latitudinal distribution may be asymmetrical.

Solar activity fluctuates over millennia and centuries, but during the Great Maximum, solar activity is at a higher level. Because of this, the solar activity produces higher levels of solar cosmic radiation, which causes greater disturbances to earth’s magnetic field, increasing its effect on our biosphere. The Spoerer and Maunder minima are lower than the 1986 minimum, but were longer than the previous minimum. If you’re interested in the occurrence of a Grand minima of solar maximum, make sure to bookmark this article.

Scientists have estimated that the recent sunspot cycle will reach a maximum sunspot number of 210 to 260 by the end of this year. That would make Cycle 25 one of the strongest cycles on record, and would be among the few to reach such a high peak. The number of sunspots that are currently visible on the sun is much lower than the average, so the peak should not be too far away.

The Sun’s magnetic field changes over time, and is a key factor in the activity on the surface. The Sun’s magnetic field reflects the intensity of solar activity and is one of the easiest ways to track the solar cycle. During the solar cycle, the Sun produces many sunspots, which are areas of particularly strong magnetic force on its surface. Because sunspots are cooler and darker than their surrounding areas, they can be a source of energy for scientists. Sunspots are most abundant during the Solar Maximum.

Scientists have long observed the gradual equatorward migration of sunspots. This trend was first noticed by Englishman Richard Christopher Carrington and German astronomer Gustav Sporer in the early 1860s. They later drew a butterfly diagram to show the trend. The sunspots of the outgoing cycle formed at low latitudes, while the sunspots of the upcoming cycle were found at high latitudes.

Forecast For Next Solar Maximum

We have the asymmetry parameter for solar activity, which we have used as a proxy for the past. We do not have relative sunspot numbers for every period, but we can predict solar activity based on several independent methods. Moreover, we have a relatively good estimate of the next solar maximum and minimum, which are expected to occur sometime between 2011 and 2017.

The solar cycle 25 will have 125 sunspots at its peak, more than the 115 at cycle 24’s peak, but far below the 180 at the end of cycle 23. The solar maximum will be visible from a line across North America from Sinaloa in Mexico to Newfoundland, Canada, and Alaska. It is expected to be stronger than the last cycle and we can expect to see more sunspots in 2025 than in the last one.

While the occurrence of a new mini ice age is unlikely, the early start of the solar cycle could be beneficial for amateur astronomers and communication satellites. It could also coincide with the April 8 total solar eclipse, which will reveal the white atmosphere of the Sun, called the corona. When viewing the solar eclipse, the corona can take on different shapes depending on solar activity. For the sake of astronomy, the next solar maximum may be even closer than the current one.

Effects Of A Solar Maximum On Weather And Climate

If solar activity is increasing, Earth’s temperature may be affected. The Sun’s activity also influences CO2 levels. Scientists study solar activity to understand how solar cycle events affect weather and climate. Here are some of the key factors that influence these cycles:

The energy balance of the Earth is the primary effect of solar variability. Changes in surface temperature are typically smaller than 0.07 degrees Celsius worldwide, but regional climate changes are significantly higher. This has significant implications for the development of global climate change. Because of the influence of solar activity, climate change can be expected to be more rapid or less severe. This effect is particularly evident in the case of solar maximum and minimum. The sun’s activity also influences the intensity of Earth’s magnetic field.

Sun’s total solar irradiance varies from solar minimum to solar maximum. A solar maximum has a large increase in incident solar ultraviolet (UV). Most of this UV affects Earth’s stratosphere. The effects of solar variability are best understood through observations of irradiance in different parts of the globe. In contrast, a solar minimum does not significantly affect the Earth’s climate.

Although the total solar energy reaching Earth changes 0.1 percent during the solar cycle, researchers have been able to link the variations in solar activity to changes in weather and climate. Researchers have attempted to differentiate the subtle effects of solar activity from the effects of human-caused global warming. Scientists at NCAR have developed computer models that simulate global climate change using centuries of ocean temperature data. They have been able to answer many long-standing questions about the effect of solar activity on the Earth’s climate.

Solar activity fluctuations affect ozone in the middle atmosphere and may have a link to regional climate variability. These fluctuations are not a trend like climate change and are a year-to-year variability. The change in the ozone content of the middle atmosphere may also affect the polar wind streams and the surface of the Earth. For example, the northern polar region experiences colder winters than the southern hemisphere.

Increased sunspot activity has been a likely cause of the hole in Antarctica’s ozone layer. Scientists say the increased solar activity caused the most dramatic decrease in ozone concentrations over Antarctica, though they might also explain lower concentrations at other locations around the world. However, other scientists are skeptical. In the 1980s, the sun’s activity peaked, and the ozone layer should be recovering.

Solar proton events have been found to disrupt ozone production. A solar proton event can result in two nitrogen atoms free from their bonds with each other. These atoms are highly reactive with oxygen and remain in the atmosphere for weeks or months. Similarly, solar proton events may break up water vapor and turn it into a hydroxide molecule, which in turn reacts with ozone.

However, this effect is weaker in the lower mesosphere, where ozone levels are not influenced by the solar activity. However, a recent study from Merkel and Beig showed that the ozone response to solar forcing was similar. In fact, the solar cycle has the potential to increase the ozone layer by 3 to four percent. The solar maximum may be one of the most important events in the Earth’s climate, and it is important to understand this cycle in order to make the right decisions.

This Solar maximum conclusion is based on data from our Sun’s surface, from the solar wind, and from the Earth’s magnetosphere, atmosphere and ionosphere. The conclusion agrees with previous decades of research presented by astrophysicists.

Our Sun is expected to continue to experience periods of moderate solar activity that includes sunspots and flares, followed by periods of low activity when there are few active regions on the Sun’s surface, no sunspots and very little solar wind. At times, we expect that these periods of high variability will exceed a decade in length.